I don’t knit with bulky, chunky, or jumbo yarns very often.  I don’t like the way the stitches look.  They seem awkward and lacking in subtlety.  Overblown, usually.

But there are times when bulky yarn, or larger, is a great choice. 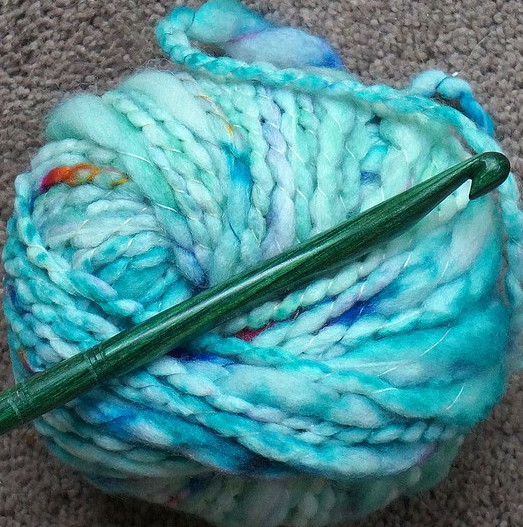 When you’re in a hurry…

Your winter hat is gone.  Who knows where.  Maybe some ninja squirrels broke into your house & stole it for winter bedding.

It doesn’t matter.  The cold weather is here and you have NO HAT!!!

Bulky yarn to the rescue.

Some knitters can whip up a hat in a few hours using worsted weight yarn.  Not me.  Even using bulky yarn, it’ll take me, hmm, many hours, which will probably work out to at least a couple of days.  Ok, yes, the quick & easy solution is to go out and buy a hat.

Unless going out just to buy a hat doesn’t fit into your plans.

Or you refuse to set foot outside until your ears are covered.

Knitting your own hat in a day or two is doable.  Scarves & mittens are possible, too.  Assuming you have the yarn & needles already on hand…

Finishing is hard to do

I’m convinced that actually finishing a project, turning a UFO into an FO, is a skill.  I’m not referring to the techniques involved in finishing, like casting off and weaving in ends, I literally mean finishing the project.

There’s a mental shift that takes place once the project is done.  The potential is gone, the reality has arrived.  Your dream of a perfect knitted piece is realized, or more often, is not.

It can be a tough bump to get over.

Knitting is a great opportunity to learn to accept and even love the less-than-perfect.  Learn to let go of the dream and accept the less than perfect reality as a step along your path to perfection.

When working with bulky or larger yarns, that moment of being done arrives more quickly.  You can’t drag it out without it being really obvious to one and all that the problem is inside you.  The project is done.  Let it go to sink or swim.

It it’s that bad, that’s ok.  Figure out a way to turn it into something else.  Or toss it and move on.  The benefits of knitting come from the process, not the finished project.

You’ve made a hat or scarf or two and now you’re ready to move onto something BIG.  What you think of as big is entirely up to you, but if you want to make sure that you finish it, consider a larger yarn.

Big yarns have crazy big gauges, like 4 stitches to the inch or less.  Think of it, every 4 stitches (or less), you’ve added another inch to your piece!  (Hah!  Take that, sock yarn!)  It’s easy to build momentum with that kind of progress.

With a heavy weight yarn, you can skim right over the doldrums without ever knowing they’re there.  The inches will pile up so fast, the end will be in sight before you know it.

There’s a lot to learn when you’re first beginning.  Holding the needles can feel awkward and then you have to add tensioning the yarn to that.  And reading your stitches.  And so on.

Big yarns can make the process of learning easier.

At first, it seems like the yarn is as slippery as an eel, wiggling all over the place.  It’s hard enough to get it in the right place on your needles.  Then you have to add holding it properly WHILE you work the needles so the stitches don’t end up so tight you’ll never get the needle in to make another stitch or so loose it looks like a great, big hole in the middle of your project.

Learning these skills is unavoidable and not as difficult as it may seem when you’re first beginning. But having a yarn that’s easy to work with, that’s big enough to see, and easy to handle, can make your early knitting efforts much more enjoyable.

Everything has it’s place and time, even “overweight” yarns.  They’re not going to always be a good choice.

I read one designer’s comments recently that suggested that “overweight” yarns aren’t a good choice for mittens.

Guess what?  I don’t have any mittens.  It’s November & I live in New England.  I need mittens NOW!

I found a “knit to fit” mitten pattern that you can use with whatever yarn you have on hand, assuming you have the right needles, so I’m going to experiment with it.  It’s a small project, so not a big investment in time or materials, and it’s also my favorite type of knitting project:  an experiment!  I already know it’ll be a success because I’ll learn something new.

How are your yarn experiments going?

P.S.  Thank you, Knitty.com, for once again providing a pattern that matched my needs and supplies.