Knitting is an appealing craft.  It seems it gets adopted everywhere it goes.  It has spread so easily and so widely that no one culture can lay claim to it.

The textile historians are reasonably certain that the oldest recognizable piece of knitting discovered, so far, is from Egypt.   The complex and sophisticated design and techniques used in that sock suggest that knitting was very well developed even then.  So most knitting historians have placed knitting as likely starting in the Middle East, which would make knitting definitely not-white.

Knitting spread to the New World with the European colonists and quickly became popular with indigenous people throughout the New World.  Like every other culture that’s gotten it’s collective hands on knitting, the indigenous peoples adapted knitting and made it their own with unique techniques and characteristic stitch patterns.  To some, like the Cowichan elder knitters, it came to hold great meaning. 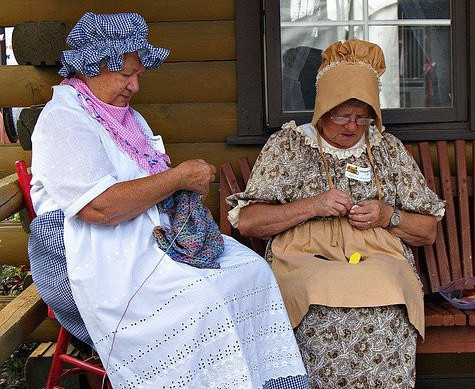 It’s easy to assume that most knitters are little old (white) ladies in rocking chairs.  That is the popular image among non-knitters.

How does that feel to you, the non-old, probably white, probably female, knitter?

And, of course, you may also be non-female.

Here’s the punchline:  everybody knits.

In North America, knitters are predominantly white women.  Our society is predominately white and knitting is seen as “something women do, not men,” so relatively few men of any persuasion engage in it.  Still, from what I’ve seen, men who knit are generally welcome in the knitting world.

Bigotry in the Knitting World

As a child growing up in rural, very conservative America, I was told at every turn that I was less than.  Nothing I said or did mattered that much because I was a girl.  Why would someone, aka a man, listen to me?

I lived through the 70’s women’s movement.  I became somewhat more aware that life was harder for me than it was for men, that I didn’t have the same opportunities or rights.  The most illuminating moment was when I was a young, stay-at-home mom fighting every day to keep my disabled son alive.  I was trying to figure out what I should put down on a form as my occupation.  My then-husband said I should write “nothing,” because I did nothing.

Now I’m a middle-aged woman.  Do you know what happens to women once we become middle-aged?   We turn invisible.  We are unseen.  We don’t exist.  We don’t matter.  More than that, most people, including younger women, want us to disappear.  If we dare to try to stay visible, we’d better look as though we’re trying to be younger, even though we’ll be ridiculed for it.

It’s probably not exactly what it’s like to be a BIPOC knitter.  But I suspect there are similarities.

There’s a reason the term “women and minorities” existed for so long.  There’s also a reason it’s no longer used.  If you add up all the women and all the minorities, you end up with a majority. And as long as we fight separately, we’ll lose.

I recently read a post on a knitting forum – not Ravelry! – where the author claimed that racism didn’t exist in knitting because she hadn’t seen any.

Brava, knitter.  I’m staying away from that forum.

No ethnic group can lay claim to knitting, but everyone can enjoy it and benefit from it.  The real question for me is how do I show respect for the knitting traditions of others without disrespecting them?

I love a diversity of patterns, colors, techniques, and styles.  Sometimes I want to knit something Victorian, like the pauper’s bag pattern I recently spotted.  Sometimes I want to knit a Southwest inspired blanket, or a Peruvian hat, or a Norwegian sweater, or even a cable-covered, Aran style sweater.  (I’m more than a little interested in that Egyptian sock, but I haven’t found any good pictures of it, nevermind a pattern.)

These are all examples of ethnic knitting and, genetically speaking, I only belong to one or two (at most) of the cultures that produced these wonderful knitting traditions and patterns.

Does that mean if I knit any of them I’m culturally appropriating them?  When is it embracing diversity?  When is it honoring another culture?

Realistically, the difference is money, recognition, and power.  If the designers from the originating cultures were recognized and recompensed for their artistry at the same rate as the white designers, there probably wouldn’t be a problem with all of us borrowing from each other and mixing and matching.

Knitting is all about honoring and valuing handcrafting.  We just have to be more careful with who gets our respect and our money.

Sorry, all, this probably isn’t what you’re looking for, but it’s where my head is at today.

We use cookies on our website to give you the most relevant experience by remembering your preferences and repeat visits. By clicking “Accept All”, you consent to the use of ALL the cookies. However, you may visit "Cookie Settings" to provide a controlled consent.
Cookie SettingsAccept All
Manage consent

This website uses cookies to improve your experience while you navigate through the website. Out of these, the cookies that are categorized as necessary are stored on your browser as they are essential for the working of basic functionalities of the website. We also use third-party cookies that help us analyze and understand how you use this website. These cookies will be stored in your browser only with your consent. You also have the option to opt-out of these cookies. But opting out of some of these cookies may affect your browsing experience.
Necessary Always Enabled
Necessary cookies are absolutely essential for the website to function properly. These cookies ensure basic functionalities and security features of the website, anonymously.
Functional
Functional cookies help to perform certain functionalities like sharing the content of the website on social media platforms, collect feedbacks, and other third-party features.
Performance
Performance cookies are used to understand and analyze the key performance indexes of the website which helps in delivering a better user experience for the visitors.
Analytics
Analytical cookies are used to understand how visitors interact with the website. These cookies help provide information on metrics the number of visitors, bounce rate, traffic source, etc.
Advertisement
Advertisement cookies are used to provide visitors with relevant ads and marketing campaigns. These cookies track visitors across websites and collect information to provide customized ads.
Others
Other uncategorized cookies are those that are being analyzed and have not been classified into a category as yet.
SAVE & ACCEPT